Broadway Street in Lawrence was once home to four movie theaters in a row. It was dubbed "Theater Row" and was listed in Ripley's Believe It Or Not for that very reason. This image was taken from a fabulous Curteich postcard, ca. 1941.

Head out to Lowell’s sister-city and support three nights of independent cinema!

Get the full schedule and directions at www.lawrencefilmfestival.org! 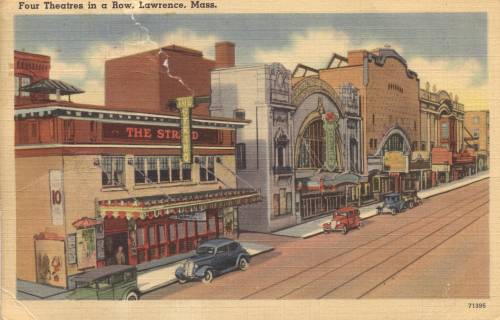 A shot from the other side of Theater Row in Lawrence, ca. 1941. The four theaters were The Palace, The Broadway, The Modern, and The Strand. One can only imagine the cine-magic that took place inside the majestic beauties.