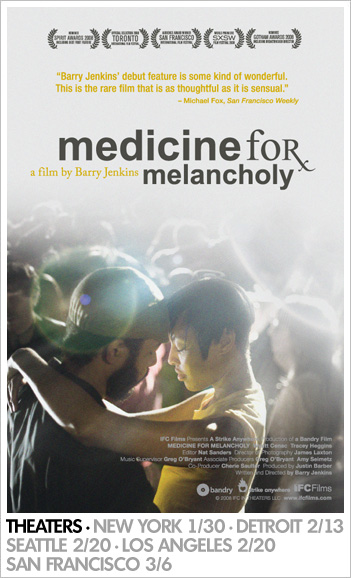 It’s been hailed as “tender, smart, and soulful” by the Village Voice. Legendary film reviewer Roger Ebert gave it 3 1/2 stars,  describing it as “beautifully photographed by James Laxton” and stating that the actors are “effortlessly engaging.” It’s Medicine for Melancholy, an independent film that has quietly become one of the best reviewed films of 2009. You won’t find it on DVD, but you will find it at Studio A tomorrow night as part of the Lowell Film Collaborative and Lowell Telecommunications Corporation “Cinema at Studio A” summer independent film series.

Produced by North Andover native Justin Barber, Medicine for Melancholy is a love story of bikes and one-night stands told through two African-American twenty-somethings dealing with issues of class, identity, and the evolving conundrum of being a minority in rapidly gentrifying San Francisco—a city with the smallest proportional black population of any other major American city.

Join us for what is sure to be one of the most memorable films of the Studio A series.

* Attending Cinema at Studio A Screenings *

– Doors open at 6:30 p.m. and seating is on a first come, first served basis. Studio A seats approximately 40 patrons.

– Studio A creates a true screening room atmosphere. For the benefit of everyone’s enjoyment, we encourage everyone to arrive on time. Thank you!