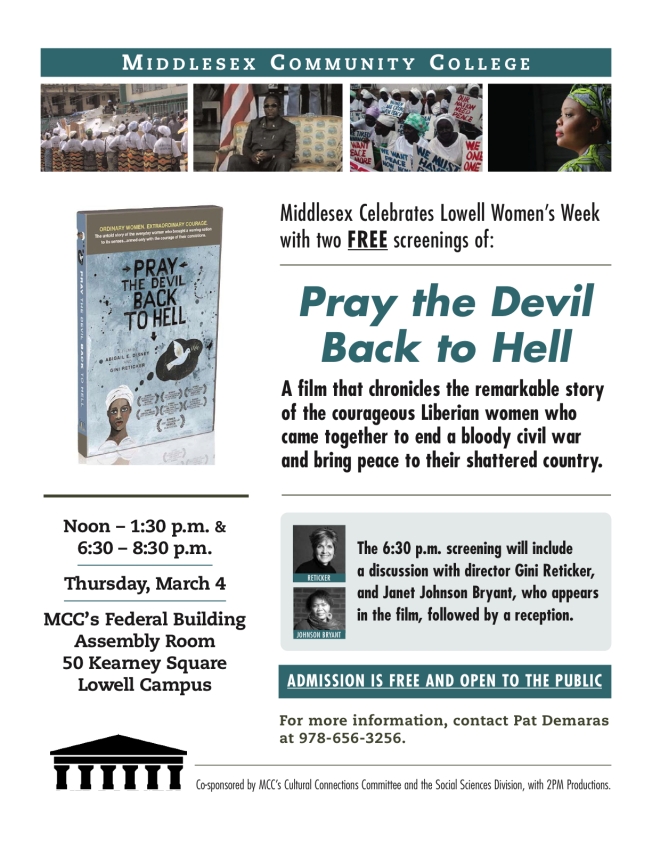 The Lowell Film Collaborative is pleased to announce that two free film screenings have joined the plethora of events surrounding the 2010 edition of Lowell Women’s Week. Pray the Devil Back to Hell will be shown twice on Thursday, March 4, first at noon, then later in the day at 6:30 p.m., at the Assembly Room in Middlesex Community College’s Federal Building. Even better, the later screening will include a discussion with director Gini Reticker and Janet Johnson Bryant, who appears in the film. The screening is sponsored by Middlesex Community College and 2PM Productions.

Pray the Devil Back to Hell chronicles the remarkable story of the courageous Liberian women who came together to end a bloody civil war and bring peace to their shattered country. Thousands of women – ordinary mothers, grandmothers, aunts and daughters, both Christian and Muslim – came together to pray for peace and then staged a silent protest outside of the Presidential Palace. Armed only with white t-shirts and the courage of their convictions, they took on the warlords and nonviolently forced a resolution during the stalled peace talks. A story of sacrifice, unity, and transcendence, Pray the Devil Back to Hell honors the strength and perseverance of the women of Liberia. Inspiring, uplifting, and most of all motivating, it is a compelling testimony of how grassroots activism can alter the history of nations.