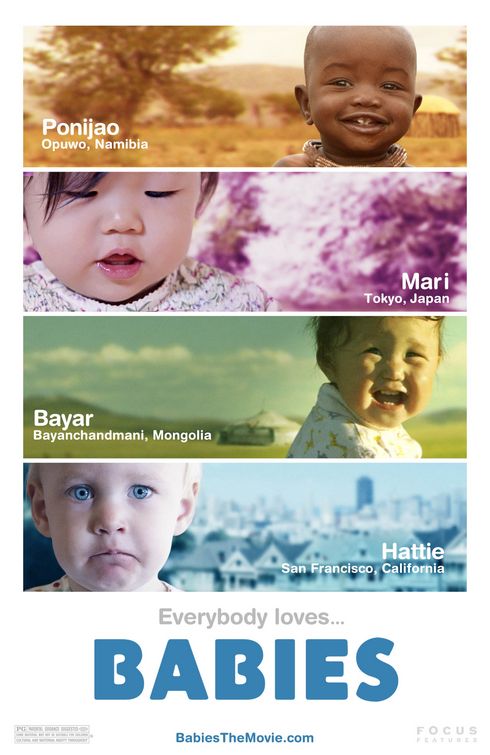 It’s all over the indie film world — the babies are coming, the babies are coming! The LFC got wind of this gem of a film last year and have been waiting with great anticipation for its release. It’s Mother’s Day weekend — no better time for Focus Features to debut their positively glorious, uplifting film BABIES. With tag lines like “Everybody Loves Babies” and yes, “The Babies Are Coming,” Focus has cranked the indie film PR machine straight up to eleven. And we think it’s working. Just check out the official BABIES website and you’ll see photos of babies, babies on facebook, babies on Twitter, calls for moms to submit films about their babies, babies sweepstakes, mommy-and-me movie days with babies, and so on. While the site has little mention of the dads of the world, there are indeed dads in the film, so daddies, don’t dismay!

Does the mom in your life need reassurance in humanity? Does she enjoy exploring the nether reaches of the planet? Does she love giggles and tummies and chubby pink cheeks? If so, make a full day of it on Sunday and hit the theaters for director Thomas Balmes‘ inspiring documentary. Bring dad, the kid, and grandkids, too. Everyone should feel welcome to take in this tender-hearted film that follows one year in the life of four babies from around the world. The scenery itself is breathtaking and powerful as we journey through Tokyo, Namibia, Mongolia, and San Francisco and the lives of four little ones and their families. Make special note of Bruno Coulais’ soundtrack, which playfully pairs itself with the visuals (one of our favorite indie songsters, Sufjan Stevens, is also featured).

Just a wee bit curious? Visit BABIES on the official Focus Features website and take a sneak peek at the joyous trailer below: