Unfortunately, when you visit a city for the first time in order to partake in a film festival, you spend most of your time there cooped up in theaters watching films without the chance to truly experience the city. Fortunately for Suzz and me, Waterville is a pretty small town, and we’ve managed to take in a few things during our small amount of downtime. We had lunch on Saturday morning at Jorgensen’s, a nice cafe in downtown with coffee and a pretty expansive (and yummy) sandwich menu, plus local chocolates and gelato. Later, we had a mid-afternoon snack at Grand Central Cafe, a brick-oven pizza place across the parking lot from the Railroad Square Cinema, and for dinner, we had a better-than-expected meal from Mainely Brews, the “Filmmaker’s Lounge” of the Festival, according to the banner hanging outside. We also had a wonderful shopping experience at Barrels Community Market, a nonprofit community market selling everything from locally-grown vegetables to locally-bottled sauces and jams to locally-made crafts and clothing. As you can see, the common word here is “local,” which is what makes Barrels so special. It’s EXACTLY what we need in the city of Lowell.

Mostly, though, this weekend has been about the films, and Saturday was chock full of them. We took in four films over the course of the day, and they were all enjoyable in their own unique ways. We started the day off with earthwork, a quiet but captivating indie film that tells the true story of Stan Herd, a farmer who traveled from Kansas to New York in 1994 to create an enormous environmental artwork on land owned by Donald Trump. Herd, played perfectly by John Hawkes, is consumed by his passion to create huge art pieces that can only be viewed from the sky. During his time in New York, he befriends a small band of tunnel dwellers and recruits them as the crew to help with his challenging new project. With unexpected barriers constantly facing him, Herd is pushed to the limit to complete the piece he views as “the one,” and ultimately it’s the lessons he learns about himself and his art that play a bigger part than the earthwork itself.

Suzz and I were both excited to see The Kids Grow Up later in the afternoon, mainly due to the impact that director Doug Block’s previous film, 51 Birch Street, had on us when we watched it last year. Unlike most documentary filmmakers, Block turns the camera on himself and his family, telling very personal stories that often make for even more emotional results. Although it lacks the same emotional punch of 51 Birch Street, The Kids Grow Up is nevertheless a touching story about a father’s struggle to let go of his only daughter and release her into the world via a cross-country move to college. Not surprisingly given his career, Block has been by his daughter Lucy’s side at every stage of her life with camera in hand. Now that she is 17 and preparing for college, he looks back on Lucy’s past via the footage he’s shot, captures the real-life struggles he and his wife face during the year leading up to Lucy’s departure, and offers a very personal yet universal story about family and parenting. A Q&A session with both Block and his wife after the screening provided additional insight that made the viewing even more special.

Later in the afternoon, we decided not to revisit the indescribable experience that is watching House, and opted instead for How to Live Forever, a unique documentary by director Mark Wexler that offers insight into growing old (or not growing old, actually) from a myriad of subjects, including the oldest living people on the planet, scientists and gerontologists, participants at a funeral directors convention and the Ms. Senior America pageant in Las Vegas, and even celebrities like Jack LaLanne, Suzanne Somers, and Phyllis Diller. At the center of it all is Wexler, a successful photojournalist who is questioning his own mortality after the recent death of his mother. How to Live Forever is funny, insightful and delightfully engaging. Following the film, director Wexler provided more stories about his journey via a Q&A with a packed house. 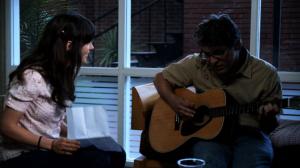 We finished the evening off with Do It Again, a documentary chronicling the story of musician and Boston Globe music reporter Geoff Edgers’ obsessive mission to reunite his favorite band of all time, the Kinks. Almost as famous for the off-stage quarrels of their two main creative forces – brothers Ray and Dave Davies – as they were for their myriad of pop music gems, the Kinks are a band for which the word “reunion” has yet to mean more than standing on stage together for award ceremonies. Edgers has bigger things in mind, however, and in his quest to locate the last surviving members of the band, he interviews a host of rock legends, including Sting, Yoko Ono, REM’s Peter Buck, Paul Weller, and even actress turned singer Zooey Deschanel. He poses the philosophical question to each of them — would a Kinks reunion be possible? — and in most instances manages to play a Kinks song with them after the interview. The film is mostly comprised of this fascinating footage, with glimpses into Edgers’ own story as a frustrated reporter and family man newly entering his 40s. Ultimately, it’s Edgers’ undying love of music that shines through in the film, NOT the outcome (which we’ll keep secret). A Q&A with Edgers, who brought his wife, daughter, and newborn to the event, uncovered still more fascinating facts about his experience.

It was a wonderful, uplifting end to what was already a perfect day of film for us. Clearly the Maine International Film Festival has had many years to perfect this event, and it shows. We have been thoroughly impressed!