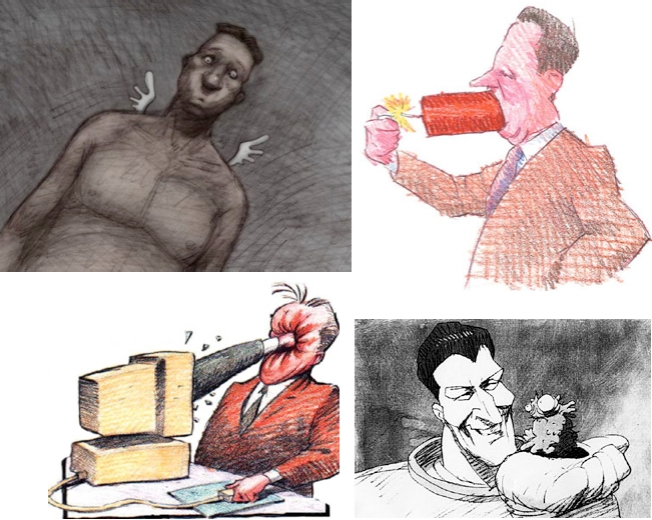 The many faces of Bill Plympton.

The LFC  has adored award-winning animator Bill Plympton since the 80’s when he emerged on the scene with his pencil-drawn animation and crazy self-portrayals which you may have seen in  Spike and Mike’s Sick and Twisted Animated Festival (which is still going strong!) or on MTV’s Liquid Television. Best known for his Oscar-nominated short Your Face, Plympton has an incredible following and an amazing breadth of work, so it’s only good and right that a documentary be made on the man and his art. That documentary, Adventures in Plymptoons!, has been completed (thanks to a successful Kickstarter campaign) and is touring the festival circuit along with Plympton himself and the filmmaking team. The tour includes a stop this weekend at the renowned Woodstock Film Festival in picturesque Woodstock, NY. If you’ve never been to the Woodstock Film Fest, it’s a marvelous treat with multiple venues, incredible films, and fabulous guests.

Bill Plympton, side by side! Self portrait (left) and at the 2008 AFI Fest.

WE’RE excited because we’ve just been contacted by Alexia Anastasio, director of Adventures in Plymptoons!, to plan a screening of the film this December along with a Plympton animation program. As if this wasn’t wonderful enough, she’ll bring Bill Plympton HIMSELF as a special guest along with her associate producer, Keven Sean Michaels. We truly couldn’t ask for anything better than that! We’d like to thank our good friend and fellow filmie Rob Newton at the Cape Ann Community Cinema for making the introduction. (Thanks, Rob!)

At this point, we’ll be talking with Alexia in the next few days to see what we can put together so rest assured we’ll keep you all posted. In the meantime, we’d like to leave you with some Plymptoon teasers to get your excitement going OR to introduce you to this marvelous animator. Stay tuned for updates on this hopeful Lowell film event!

– Get to know Bill Plympton at Plymptoons.com –