Lowell Parks & Conservation Trust (LP&CT) and the Lowell Film Collaborative present the Lowell premiere of Marion Stoddart: The Work of 1000 with a very special guest appearance by Marion Stoddart herself! This free film event, which includes a post-film discussion with Stoddart, is part of the LP&CT’s Annual Meeting, which the public is invited to attend. We are very grateful to Jane Calvin and Lowell Parks & Conservation Trust for inviting us to be a part of this great community event.

ABOUT THE FILM
In the 1960s, the Nashua River in New Hampshire and central Massachusetts was one of the 10 most polluted in the country, clogged with multicolored, toxic sludge from nearby paper mills. Around that time, housewife Marion Stoddart moved to the area with her family, so close to the river they could smell its noxious fumes. At a low point in her life, she decided to fight her own emptiness by taking on the biggest challenge she could find — cleaning up the Nashua. Her dramatic success in mobilizing the community showed people that change was possible, even though they’d lost hope. 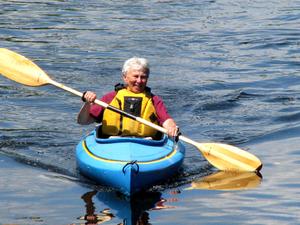 Marion Stoddart enjoying a day on the water.

Marion’s efforts helped get the Massachusetts Clean Rivers Act passed so that companies weren’t allowed to pollute rivers like the Nashua anymore. In the process, she won a United Nations award, was profiled in National Geographic, and had a widely-read children’s book written about her. Her secret? An ordinary person can do extraordinary things when they refuse to give up. Thanks to Marion, children in the Nashua River Watershed and around the world have come to understand that one person can make a difference, even when the odds seem impossible!

The official website for Marion Stoddart: The Work of 1000 is something to behold, full of amazing documentation of the film, the cleanup project, and Marion herself. We wholeheartedly encourage you to take some time to visit Workof1000.org — you will absolutely be inspired! You can also visit the film and engage in ongoing environmental community projects via Facebook at Facebook.com/Workof1000.