“The most moving documentary I’ve seen in years. Both an ardent love letter to past vitality and a grateful salute to those who remain in place … ”
David Denby, THE NEW YORKER 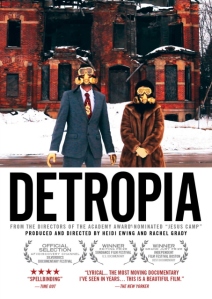 Detroit’s story has encapsulated the iconic narrative of America over the last century — the Great Migration of African Americans escaping Jim Crow; the rise of manufacturing and the middle class; the love affair with automobiles; the flowering of the American dream; and now . . . the collapse of the economy and the fading American mythos. With its vivid, painterly palette and haunting score, Detropia sculpts a dreamlike collage of a grand city teetering on the brink of dissolution. These soulful pragmatists and stalwart philosophers strive to make ends meet and make sense of it all, refusing to abandon hope or resistance. Their grit and pluck embody the spirit of the Motor City as it struggles to survive postindustrial America and begins to envision a radically different future.  [Taken from DetropiaTheFilm.com]

Join the Lowell Film Collaborative and UMass Lowell Professor Robert Forrant for a memorable afternoon of discussion and discovery! This event couldn’t be presented at a more poignant time in our nation’s political history. Bob Forrant’s keen knowledge of and passion for socio-economics and the rise and fall of the American city will take you further into this film’s journey — we truly hope you’ll join us.

“This haunting piece of documentary cinema tells the story of one city in economic decay; but really, as the real people in the film repeatedly state, this isn’t just a Detroit problem; it’s an American problem.”
Tambay A. Obenson, INDIEWIRE

… “Detropia” stands out for how it encapsulates the causes and potential solutions.”
John Horn and Steven Zeitchik, LOS ANGELES TIMES