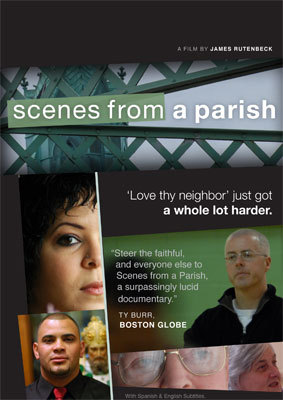 Earlier this year, the Lowell Film Collaborative hosted the Lowell area premiere of James Rutenbeck’s powerful documentary Scenes from a Parish, including a Q&A with the director himself. We’re excited to announce that the film is making its television premiere via PBS’s Independent Lens series on WGBH 44 this Sunday, January 3 at 9 PM. Read the official press announcement here. [note – you may notice the premiere date as December 29 in many materials; this is because the film premiered on Dec. 29 in all PBS markets except the Boston area, where scheduling conflicts postponed its premiere to this Sunday]

Filmed over four years in Lawrence, Mass., Scenes from a Parish chronicles the efforts of Father Paul O’Brien, an irreverent young Harvard-educated priest who embarks on an ambitious plan to build a church-based meal center that will feed the hungry of the city. He enlists high-profile allies for help, including his Harvard classmate Conan O’Brien, while dealing with angry old timers who are dismayed by the rapid changes transforming their once traditional parish; a place that offers Spanish services and aid to members with new and frightening problems like addiction and gang activity. The story comes to life through the personal stories of several parishioners who come to the church seeking fellowship, but face obstacles that threaten to drive them apart.

If you weren’t able to make it to the LFC screening this past May, put aside some time this weekend to watch or DVR the film. It’s a fascinating portrait of life in our sister Mill City and Father O’Brien’s admirable efforts, now officially known as the program Labels are for Jars.

The LFC wishes you and your family and Happy and Healthy New Year. Thanks for your continued support!