Happy 2010 Everyone! We hope you had a joyful New Year’s Eve!

To ring in the New Year, we spent several days in beautiful, hippy-historical Woodstock, NY. It was a grand weekend of relaxation, film-watching, and as always, perusing the area for any cinematic activity. We were not disappointed!

Upon entering Woodstock, we were greeted with two things, the first being the official headquarters to the renowned and incredibly successful Woodstock Film Festival. Celebrating 10 years of bringing great independent film to the Hudson Valley, the Woodstock Film Fest is the real deal, with enough indie super-star involvement and audience support to yield many days and nights of film + music at a variety of venues. The planning committee is sizey, and their offices beckoned to us. If you haven’t been to this part of the Catskills, it is well worth the slightly over 3-hour trek from the Lowell area. Film is alive and well there, thanks to this great Fest. If all goes to plan, we’ll be volunteering our time for this year’s festival, September 29 – October 3, 2010.

Visit the Woodstock Film Festival at www.woodstockfilmfestival.com and check out the details on past festivals as well as their list of supporters and planning committee members. Make your fall festival plans NOW!

Get a great look at Woodstock’s historic Tinker Street Cinema (our second find) at the 2009 Woodstock Film Festival premiere of The Messenger: 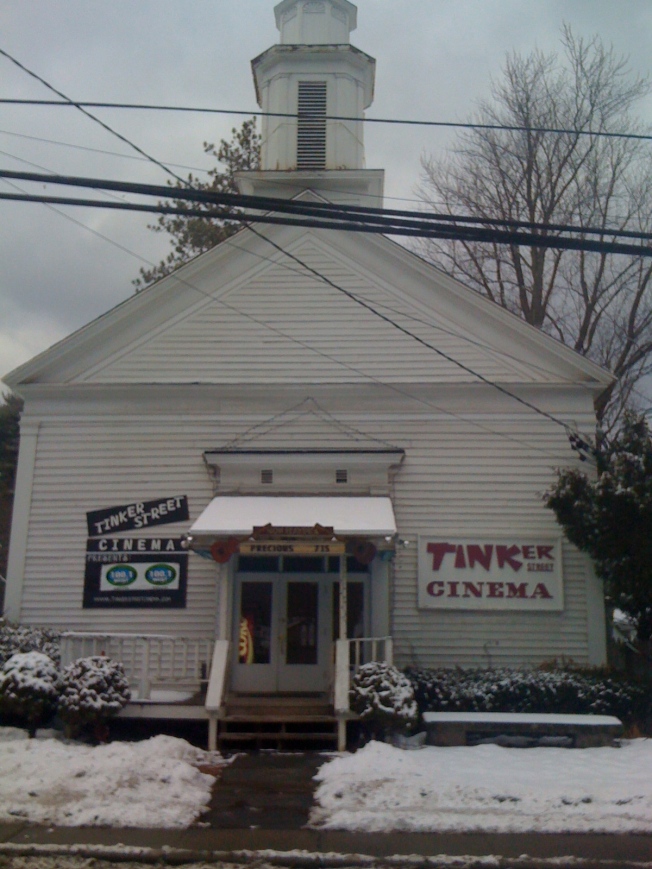 The second little discovery we made was a real thrill. The historic Tinker Street Cinema, right at the entrance to historic downtown Woodstock, is a 160-seat, single screen theater that was converted 30 years ago from a Methodist Church. The church facade has been totally left intact, adding to the charm of this great find. We of course inquired with employees about the theater’s history, but found a bit more information on everyone’s favorite online resource, YouTube. There you can actually see co-owner Nancy Adler (husband Cyrus Adler is the other co-owner) take you on brief tours of the theater and offer a bit of advice and insight on their own experiences of running an indie screening space. Adler is a bit shy but endearing, and though they only offer a tiny glimpse into the lives of these two film buffs, it’s great to see the Adlers’ obvious love for and dedication to indie cinema, and the community. And the Tinker’s true claim to fame? Legendary rocker Jimi Hendrix graced its stage!

Pay a visit to the Tinker Street Cinema at www.tinkerstreetcinema.com.

If you have any anecdotes or tidbits of information on the Tinker Street Cinema or the Woodstock Film Fest, please drop us a line or leave a comment — we’d love to hear from you!